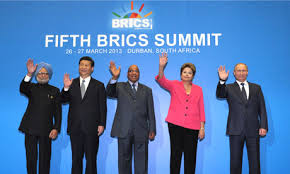 The puzzle is probably as applicable to Europe as to the rest of the world. Looking at the way intelligence agencies have been spying over European citizens, or at the “legacy of poverty” that the austerity policies are leaving behind, we can legitimately wonder if freedom, social justice, democracy and human rights are at all appealing within the West itself and, specifically, in Europe. However, the question that I ask myself today is whether these values and norms are still attractive in developing countries, if they ever were.

A few days ago, I attended an event co-organised by Ipsos Mori and KCL International Development Institute, where they presented a research into public perceptions about growth and prosperity in emerging economies. The survey was conducted online and about 6000 people were interviewed in 11 countries: Brazil, Argentina, Russia, Turkey, Saudi Arabia, South Africa, India, China, South Korea, Indonesia and Mexico. When asked about what country/region has the best economic ideas and offer better employment opportunities, the US and China led way ahead (28 and 26%) and the EU came third (16%). In fact, the EU only was first in 2 of the 11 countries: Turkey and South Korea. Interestingly enough, Brazilians, Russians and Indians all agre that China is leading the way among the BRICs. From the perspective of the emerging world, the Chinese model now seems at least as relevant as the American one, and the decline of Europe is just evident.

This research seems to go in line with the data made public by Pew a few months ago, according to which, although overall the US is still more popular than China, the gap between the two is decreasing rapidly in Latin America, Africa and Asia, and in the Middle East, China wins by a landslide.

I am aware that if the questions asked in the Ipsos survey had referred to “social values” or living preferences, the responses would had probably been different, but I cannot help asking anyway: Does this research indicate that values and norms traditionally embraced by the West and particularly by Europe (at least at the discourse level), such as freedom, justice, democracy or human rights, do not sell anymore? In other words, have we been fooling ourselves taking for granted that the world admires and shares “our” values when the sad truth is that now that a new and cheaper brand is on the shelf, most buyers just go for it?

In another event at King’s last week, I had the opportunity to listen to the Brazilian Ambassador in London, Roberto Jaguaribe, talking about the relationship between Europe and Brazil. When asked about the Brazilian role at promoting human rights across the world, he said that his views have evolved over time (in what direction? He didn’t specify), but that in his opinion often human rights are just instrumentalised in politics, which would make them suspicious. Fair enough, but one would expect a more constructive approach about one of humanity’s most important achievements in the second half of the 20th century from such a high-level diplomat of one of the countries that is called to be decisive in international affairs in the immediate future.

So, let’s get back to the question: Do human rights, freedom and justice enjoy any support outside Europe and a few more Western countries? Thankfully, other studies let us be a bit more optimistic. In 2008, World Public Opinion asked more than 47.000 people in 25 diverse countries about their views on human rights. In every country the Universal Declaration of Human Rights got strong support, and so did the UN as a relevant actor in the promotion of human rights.

The research by KCL and Ipsos Mori, or the one presented by Pew a few months ago, may not give enough evidence to conclude that the ideal of human rights for all is at risk (again, the ideal). After all, everybody wants to live in a free and prosperous society. Yet, when forced to choose, people probably feel the need to opt for prosperity at the expense of freedom. If so, the challenge is how to avoid making the choice inevitable. In this sense, supporting and increasing the local constituency in support of human rights in the Global South and lobbying rising powers so they attach value to human rights both domestically and internationally must be two strategic priorities for those who believe in and care for human rights. Provided we still believe, as seemingly we did after World War II, that “the inherent dignity and (…) the equal and inalienable rights of all members of the human family is the foundation of freedom, justice and peace in the world”.

Ecocide: the international crime that could have been but never quite was | Bombardment of Damascus 90 years later: Two questions around the Responsibility to Protect | Dear fellow jurists, human rights are about politics, and that’s perfectly fine | Why Amnesty’s word still matters – #ICM2015 | Right to housing in Spain: What have the Romans ever done for us? |