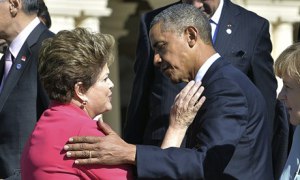 Only a few days ago I briefly presented the research of my life, which I have just started and deals with the influence that human rights make on foreign policy making in Europe. In particular, at the moment I am reading and thinking about why countries choose to embrace and foster certain human rights norms rather than others. Right when I was about to accept that principles, ideas and identities play a significant role in the construction of national interests and, therefore, in the way countries interact with each other (“anarchy is what states make of it” and so on), we read in the papers that the US has been spying on foreign allies for a good number of years.

In making sense out of it, no other analyst has been more spot on than Thucydides and his Melian Dialog back in the 5th century BC: “The strong do as they can and the weak suffer what they must”.

Liberal institutionalists of all sorts may find interesting that the 5 big Western English-speakers (Canada, Australia, New Zealand and the UK, along with the US), set up the so-called Five Eyes group and agreed to share intelligence and not to spy on each other. It is also remarkable that Germany and Brazil are leading a coalition of countries to draft a UN General Assembly resolution calling for the right to privacy on the internet. According to media reports, the draft resolution interprets the surveillance as a potential threat to human rights and makes direct references to the 1966 International Covenant on Civil and Political Rights, ratified to this day by 167 countries.

These are definitely interesting (and perfectly understandable) reactions and it is noteworthy that the frame “human rights” is brought to the diplomatic table in this case. Yet, observers would miss the point entirely if they exaggerated the weight of these reactions. Compulsory power, understood as the interaction that allows one actor to have direct control over another (Barnett and Duvall 2005, 3), explains what the US has been doing and will certainly keep doing to its allies. It also tells a lot about the victims’ limited response so far. That is also why Obama’s adviser on homeland security and counterterrorism doesn’t sound convincing at all when she promises that “we want to ensure we are collecting information because we need it and not just because we can”. They will not do anything to restrain their power on their own and the rest of us need to get over it soon.

2 Responses to NSA surveillance confirms the realist paradigm, and I am not happy about that