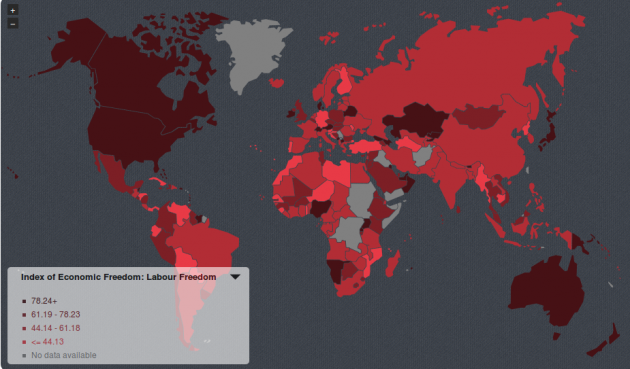 I will be honest with you: I tend to dislike the idea of categorising human rights violations with numbers. If human rights are indivisible and interdependent, how can we say that the violation of this right deserves a “4” while the violation of that one will do with a “2”. Does that mean that two of the latter equal one of the former? It won’t be me telling that to the victim.

It may be my natural predisposition to nuance or it may be that this is precisely one of the first things you learn when you join Amnesty International, something I did in my teen years. Amnesty refuses to rank countries. Ask an Amnesty spokesperson to tell you who is the worst and who comes second. They will certainly reply that Amnesty’s role is not to contrast human rights violations from country to country. Now, you’re entirely free to reach your own conclusions from the fact that Israel gets at least one report, press release, update, urgent appeal or some other sort of document per week, while Luxembourg is pretty much absent from the website (try and do search; references to the European Court of Justice don’t count, by the way). You can infer whatever you deem appropriate, but Amnesty will not do it for you.

As said, I am not inclined to quantify human rights violations, but I have come to understand that I need to do something with this natural inclination of mine. Violations of human rights are not evenly distributed across the globe. No country is perfect but some are worse than others, and within them some people struggle more and some don’t suffer at all. Quantitative information probably won’t increase your sensitivity towards human pain, but data is a fine tool when it comes to identifying discriminatory patterns, exploring trends, foreseeing possible crises… or testing the truth in officials’ statements.

One of the consequences of the growth of international human rights law and institutions is that governments cannot act anymore as if human rights did not exist. They may disagree about their content, foundations or mechanisms of accountability, but virtually all governments in the world feel the need to have policies on human rights issues and positions on human rights violations beyond their borders. Quantitative efforts to monitor human rights play a critical role in assessing governments’ reactions in relation to the human rights abuses committed in other countries. When it comes to human rights, it is unreasonable to expect consistency or, even more, coherence, since this one “demands not simply that a rule is applied equally to everyone, but that any distinction or exception can be justified in principled terms” (Lerch and Schwellnus 2006, 307). In analysing foreign policy from a human rights perspective, effectiveness matters much more than consistency. However, as Baehr and Castermans-Holleman (2004, 65) said, “the burden of proof that an inconsistent or less consistent policy may be more effective in the promotion of human rights rests with the government choosing such instruments”. Initiatives like the Human Rights Atlas shed light on facts and acknowledging reality is the first step to change it. Using stats to put human rights violations in a map may not be the most emotional of all human rights monitoring activities, but it is absolutely necessary in analysing the motivations and purposes of human rights in foreign policy or, in other words, in sieving governments’ words into the bowl of facts.