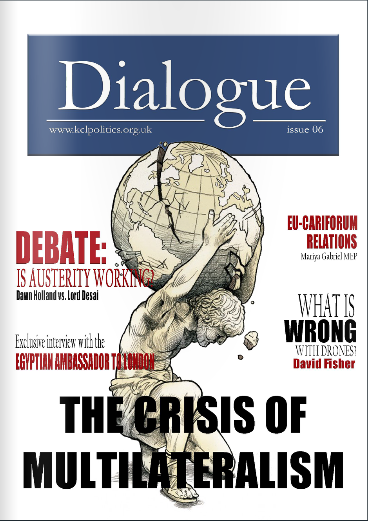 This article was originally published in Dialogue, issue 6, winter 2013.

In the last two decades, norms and beliefs have put on weight in scholarly research in international relations. Traditional (neo)realists would still insist that international relations are only about one predetermined goal, that is, survival. Nonetheless, among those willing to accept that there is room for choice in foreign affairs, the study of human rights in foreign policy has focused so far on issues like motivations, consistency, assessment and impact. These are certainly critical aspects that deserve due attention in order to comprehend the possibilities of a foreign policy that includes human rights into its defining elements. However, I believe it is time to take another step and make the case that the existing global legal regime imposes certain human rights duties on States also when they work as international actors.

A necessary starting point is the principle of pacta sunt servanda (“agreements must be kept”), enshrined in Article 26 of the 1969 Vienna Convention on the Law of Treaties, which says that “every treaty in force is binding upon the parties to it and must be performed by them in good faith”. Article 27 expands on the idea and states that “a party may not invoke the provisions of its internal law as justification for its failure to perform a treaty”. As observed by the Permanent Court of International Justice back in 1930 (Greco-Bulgarian communities case), “it is a generally accepted principle of international law that in the relations between Powers who are contracting Parties to a treaty, the provisions of municipal law cannot prevail over those of the treaty”.i

As a consequence, since human rights are recognised in international law, respecting them is not a matter of policy but of rule of law. Still, the conventional approach has seen human rights law as imposing certain obligations for public bodies only when they act within national borders, but not beyond. This is the effect of national jurisdiction. International rules on diplomatic protection and States’ responsibility indicate that a State must refrain from causing harm to another State. These rules also mean that when a State harms another State’s national such action is considered a wrongful act by the former State against the latter. However, the principle of national jurisdiction sets an important barrier: At least in theory, diplomatic protection works fine when the national of State A is within the jurisdiction of State B and is victim of a wrongful act by the officials of this second State; however, diplomatic protection does not seem effective when the national of A remains within A’s jurisdiction but is victim of a wrongful act committed by B.ii

In order to extract the ultimate potential of human rights law and principles, it is necessary to assess State responsibility based on the effect or impact that States’ officials may have, regardless of territoriality. There is a growing volume of normative research and advocacy work on the legal dimension of international cooperation and development as a State duty.iii Similarly, a slow move from the concept of “national jurisdiction” to the idea of “effective control” has allowed international courts to apply International Human Rights Law in conjunction with International Humanitarian Law in times of war and military occupation.iv Finally, in September 2011, Maastricht University and the International Commission of Jurists gathered a group of experts in international law and human rights, who adopted the Maastricht Principles on Extraterritorial Obligations of States in the area of Economic, Social and Cultural Rights.v Moving from territorial jurisdiction towards effective impact in the understanding of States’ legal obligations would open a window of opportunity to frame foreign policy in human rights terms.

In order to be truly effective, human rights must be a response to power, wherever this power comes from. States must not be allowed to do abroad what they are not supposed to do at home. In 1981, the UN Human Rights Committee put it eloquently in the López Burgos v. Uruguay case: “It would be unconscionable to so interpret the responsibility under article 2 of the Covenant as to permit a State party to perpetrate violations of the Covenant on the territory of another State, which violations it could not perpetrate on its own territory”.vi Even though the Human Rights Committee was dealing with very specific circumstances in that case (a Uruguayan national who was kidnapped in Argentina by Uruguayan forces and clandestinely and secretly transported back to his home country), the point is entirely applicable to the topic at hand: The human rights legal standards that public officials ought to respect at the domestic level must also rule when the State acts in its international capacity. Insofar foreign policy is public policy, it cannot be conducted as if human rights did not exist.

This is not a descriptive or analytical article. It is policy oriented and normative in nature. In fact, due to space limitations it basically only asserts the need to apply human rights in one of the loci where they are needed the most: International relations. The legal basis must be fully explored and the policy implications properly evaluated, and both goals require further and more detailed analysis.

As reminded by Goldstein and Keohane, “periods in which power relations are fluid and interests and strategies are unclear or lack consensus generate demands for new ideas”.vii Based on the assumption that foreign policy is a matter of raison d’état, political leaders have historically taken for granted that foreign policy should be excluded from democratic control and public scrutiny.viii If we must learn one lesson from the NSA surveillance, it ought to be that the time for a foreign policy in line with human rights has come.