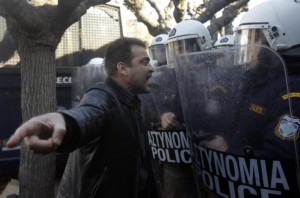 Earlier this month, the Greek Government assumed the Presidency of the Council of the EU for this semester. In an attempt to show off the austerity efforts made by his Government, the Deputy Prime Minister, Evangelos Venizelos, said in a recent interview with Euronews:

Over the past three and a half years, Greece has made the biggest fiscal adjustment in the history of the western economy. We began back in 2009 with a 12 percent primary deficit, and now we have achieved a primary surplus, which in terms of structural surplus – that is not taking into account the circumstantial results of the recession – is as high as 6.5 percent. We are by far the best-performing country in Europe in terms of primary fiscal results, and one of the best in the world.

As written some time ago, if Greece had been militarily occupied instead of “rescued” by the Troika, international law would have provided some more tools to protect the local population. Having said that, even in the current situation international human rights law imposes certain obligations. In particular, one must question whether such an impressive evolution of the public accounts over a short period of time (from -12 to a projected +6.5 in a lustrum) goes in line with the International Covenant on Economic, Social and Cultural Rights (ICESCR), ratified by Greece back in 1985.

Article 2.1 of the ICESCR says:

Each State Party to the present Covenant undertakes to take steps, individually and through international assistance and co-operation, especially economic and technical, to the maximum of its available resources, with a view to achieving progressively the full realization of the rights recognized in the present Covenant by all appropriate means, including particularly the adoption of legislative measures.

The expression “by all appropriate means” has been authoritatively interpreted in a broad sense. Since States hold the relevant information, they bear the burden to prove that their policies are fit to ensure an adequate level of enjoyment of the socioeconomic rights of the population. The appropriateness of a policy tool depends upon its ability to fulfil the rights enshrined in the Covenant. As regards to the “maximum of (its) available resources”, public policy will be reasonable insofar as it takes into account the precarious situation of the most vulnerable people, preventing any form of direct or indirect discrimination. In the words of the UN Committee on Economic, Social and Cultural Rights,

Should a State party use “resource constraints” as an explanation for any retrogressive steps taken, the Committee would consider such information on a country-by-country basis in the light of objective criteria such as: (a) the country’s level of development; (b) the severity of the alleged breach, in particular whether the situation concerned the enjoyment of the minimum core content of the Covenant; (c) the country’s current economic situation, in particular whether the country was undergoing a period of economic recession; (d) the existence of other serious claims on the State party’s limited resources; for example, resulting from a recent natural disaster or from recent internal or international armed conflict; (e) whether the State party had sought to identify low-cost options; and (f) whether the State party had sought cooperation and assistance or rejected offers of resources from the international community for the purposes of implementing the provisions of the Covenant without sufficient reason.

Even though Article 2.1 talks about “achieving progressively”, the legal recognition of socioeconomic rights as human rights (as Greece did when it chose to ratify the ICESCR in the exercise of its sovereignty) entails “a minimum core obligation to ensure the satisfaction of, at the very least, minimum essential levels” of each right. “If the Covenant were to be read in such a way as not to establish such a minimum core obligation, it would be largely deprived of its raison d’être. (…) In order for a State party to be able to attribute its failure to meet at least its minimum core obligations to a lack of available resources it must demonstrate that every effort has been made to use all resources that are at its disposition in an effort to satisfy, as a matter of priority, those minimum obligations”.

The situation in Greece has been framed as a “humanitarian crisis” many times since the financial world collapsed sweeping aside the rest of the world in its wake. The UN Independent Expert on Foreign Debt and Human Rights visited the country last year and identified the link between the socioeconomic retrogression in the country, on the one hand, and the austerity measures imposed by the Troika and executed by the Government, on the other. The Deputy Prime Minister said in the mentioned interview that Greece is the “best-performing country” in the execution of a certain fiscal policy: austerity. The irony is that this is precisely the reason why the Greek Government has been defaulting on its legal obligation to respect, protect and fulfil socioeconomic rights. The Greek case confirms that in times of humanitarian crises, being the best in terms of fiscal austerity is incompatible with respecting human rights. This is hardly new, but the EU, the national governments and their elites seem committed to ignore it. Therefore, we are forced to repeat it ad nauseam.