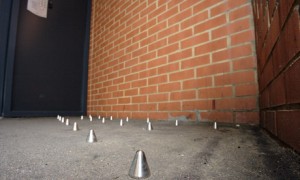 These spikes were installed in the entrance of a luxury block of flats in South London. Somebody took the picture and sparked a rapid reaction on social media. Both the local Council and the Mayor of London urged the owners to remove them as soon as possible. I don’t know if they are still there. It is a private area and public authorities have demanded action. They are not the ones to blame in this case. However, what if these spikes had been installed in a public square? And even in the case at hand, what about the legitimate right to property of the people living in those flats?

The UK ratified the International Covenant on Economic, Social and Cultural Rights in 1976. It did so in exercise of its national sovereignty and without reservations. This treaty imposes on British public authorities the obligation to take steps to the maximum of the available resources in order to achieve progressively the full realisation of the rights recognised therein (Art. 2.1). The right to housing is one of them (Art. 11). One of the most frequently heard arguments against socioeconomic rights is that they are too expensive and therefore cannot have immediate effect. However, socioeconomic rights impose immediate obligations, such as non-discrimination and the need for states to prevent from interfering in the enjoyment of these rights. That aside, it is true that the full realisation of economic, social and cultural rights requires time. However, this does not mean that public authorities have no obligation at all. Governments are required to provide evidence that their policies are heading in the right direction in order to make the whole list of socioeconomic rights real for all. They must prove that their policies have no discriminatory effects, and that any regressive measure in relation to any right has been carefully considered and justified by reference to the totality of the rights enshrined in international human rights law.

Taxation is one of the tools by which governments can achieve progressively the full realisation of these rights. As said, the UK Government will have to provide evidence that its fiscal policies are in line with its obligation to respect, protect and fulfil the right to housing it has promised to abide by. Available data does not seem to go in the Government’s favour, though. Oxfam has recently denounced that:

Inequality is a growing problem in the UK. While austerity measures in Britain continue to hit the poorest families hardest, a wealthy elite has seen their incomes spiral upwards, exacerbating income inequality which has grown under successive governments over the last quarter of a century. Today, the five richest families in the UK are wealthier than the bottom 20 per cent of the entire population. That’s just five households with more money than 12.6 million people – almost the same as the number of people living below the poverty line in the UK.

The UN Special Rapporteur on the Right to Housing issued her report on the UK in 2013 after visiting the country and meeting civil society organisations and public authorities. Her report, critical as it ought to be, was disgracefully received by conservative media and, rather worryingly, by the chairman of the senior party in power.

The Special Rapporteur regrets that some policies and practices which have resulted in the progressive realization of the right to adequate housing are being eroded, and that the structural shape of the housing sector has changed to the detriment of the most vulnerable. She expresses her concern that recent measures are contributing also to an increased vulnerability of those who, until a few years ago, were protected. (para. 79)

When could I start considering the anti-homeless spikes? Only when the State proves that it is using all available resources, including taxing the rich adequately, to ensure the progressive realisation of the right to housing. If the rich do not pay their fair share and the Government does not assess the impact of its policies proving that it is doing its best, I don’t want to hear about the inconvenience of having the possibility of seeing a man sleep at your doorstep.