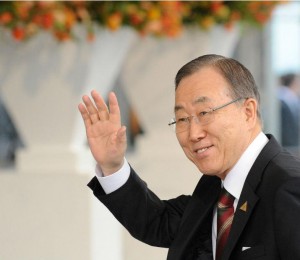 The battle to replace Ban Ki-moon has begun. A recent article by Colum Lynch (@columlynch) in Foreign Policy speaks about the race, the likely competitors and the interests at play. The author explains how the most powerful countries tend to prefer contestants from nations with little weight in international politics. He also talks about the strategies previous nominees have followed, and foresees that the next Secretary General may come from Eastern Europe, notwithstanding the quiet movements of certain players from Latin America to Australia and the ongoing EU-Russia tensions. Not in vain, the UN Secretary General is appointed by the General Assembly, on the recommendation of the Security Council (Art. 97 of the UN Charter), where vetoes are always an option.

This time some people are committed to change the way the Secretary General gets chosen. A number of civil society organisations are campaigning under the platform #1for7billion (@1for7billion), calling for a “process that meets the higher standards of transparency and accountability that UN Member States and civil society have been demanding for years, (…) a process that provides meaningful involvement from all Member States, appropriate input from civil society, and that matches that of other high-level international appointments”. They demand transparency and citizens’ active participation. They oppose the business as usual that has ruled the nomination since 1945. They want 1-for-7-billion, not 1-for-193-mostly-15-really-5.

The English School of International Relations provides a good framework to explore the forces that pull in opposite directions in the selection of a new UN Secretary General. In particular, I am thinking about the Order-versus-Justice debate this school has walked around since the 1960s. In our case, by Order I mean states’ preferences based on national interests and the rules of the diplomatic game, and by Justice I mean transparency, open debate and active participation of the people.

Hedley Bull defined order as “a pattern that leads to a particular result, an arrangement of social life such that it promotes certain goals or values” (The Anarchical Society, 2002[1977], 3-4). For the first generation of English Scholars, the maintenance of order was what brings states together to transform the international system into an international society. The international society is therefore constituted by independent states that recognise each other as members of the same club. Order is highly desirable because it is “the condition of the realisation of other values”, including justice (Bull 2002[1977], 93). Yet, order trumps justice as the driver of state action and as the force that keeps the society alive. The goals of order do not derive “from the interests simply of the ruling group, but from the perceived interests of all states in securing the elementary conditions of social coexistence” (Bull 1969, 630).

Over time, some self-defined representatives of English School have shown themselves more willing to consider a different axis for the international system: Justice rather than (or at least as much as) Order. This new wave of scholars talk about a “solidarist consciousness” (Hurrell 2008) and about the replacement of the state-led international society by a mélange of actors in the post-Cold War “world society” (Buzan 2004). The first generation are often called “pluralists” and the second one, “solidarists”. Cochran explains the difference between them with high precision: “For pluralists, moral community does not run deep and cannot be relied upon to sustain cosmopolitan duties in international society. (…) For solidarists, there are indications that from a minimum level of moral community, more maximal ethical concerns can be brought to bear within international society without compromising the edifice of this intersocietal form” (2008, 293-294).

One year and a half is the time to go before the appointment of the next Secretary General. Over this time, we will see if order trumps justice when it comes to choosing the name of the head of the UN. It will be a test about whether we live in a world society where justice matters as much as order or in a club ruled by order and run by states.