Yesterday, 15 June, Britain celebrated the 800th anniversary of Magna Carta. The text proclaimed some of what we now call “human rights”, related to fair trial and the rule of law. It was meant to be a peace treaty between English barons and a particularly bully monarch, King John. Magna Carta did not really apply at the time, war resumed soon after and most of the text was repealed throughout history. However, yesterday, the birthday was greeted with royal splendour and the Prime Minister said that Magna Carta “changed the world”. Not bad for someone who not long ago didn’t know the literal translation of Magna Carta (it’s “Great Charter”, by the way).

David Cameron is not alone in his enthusiasm. Others have claimed that we still enjoy the rights “won” in 1215. BBC refers to Magna Carta as “the document that heralded modern democracy”. And the rather obsessive-looking historian David Starkey is convinced that the proclamation of property rights in Magna Carta was “the foundation of everything else”, in a way that other countries, like China and Russia, have not experienced to this day; Magna Carta was “unique in Europe” and Americans and continental Europeans learned about civil liberties from it.

I must confess my fascination. As a citizen of Spain, I think democracy and civil liberties only got to my home country during the short republican experience between 1931 and 1936, and more strongly, in the late 1970s after Franco’s death. I now live in England and I am impressed to see that my host country has apparently enjoyed freedom and rights at least for seven more centuries.

I suppose Brits must have learned quite a lot over time. I am eager to hear all the lessons should they care to share.

Yet, leaving that aside for now, something else calls my attention. What do the celebrations mean about Britain and the British idea of human rights? 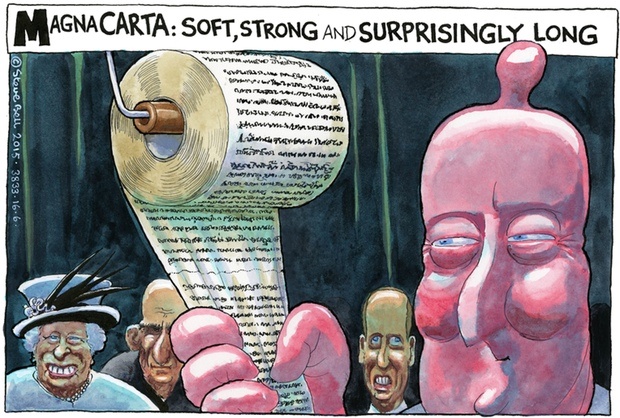 Politicians, scholars and discussants have managed to reconstruct the Magna Carta as a document deeply rooted in the history and the identity of the nation. (Incidentally, England? Britain? UK? I never know! But, then, I hold a Spanish passport, so who am I to speak about nationality!?) The rights enshrined in that text would be British-born and therefore detached from the surge of the idea of human rights in continental Europe, with civil rights from the Enlightenment and social rights from workers’ movements in the 19th century.

There is something else, though. The narrative suggests that human rights would also be the product of a negotiation between the Crown and an élite, which at the time was represented by aristocracy. This idea claims that human rights would come from a gentlemen’s agreement among equals, or rather, as if equals. Moreover, it assumes that the top stratum accurately represents the wishes and interests of everybody, regardless of their socioeconomic origin.

The message goes approximately like this: We invented human rights in Britain, or at least we invented the idea of human rights that applies in these islands. We have had these rights for centuries. We agreed on them much earlier than anybody else. We won’t tolerate intrusion. And human rights are not supposed to generate conflict among us. We are all together on this, as a nation of free men (and women, but later… ehem).

I am not a historian, but I consider the idea of human rights truly appealing, and therefore I find hard to believe that one country could keep this wonderful discovery from its neighbours for centuries.

However, this rosy story about Magna Carta and its role in British history and identity can serve political purposes pretty well. And so does PM Cameron, who wrote in The Sun just yesterday:

Britain will not be told what to do on human rights by euro judges because we invented them 800 years ago.

It’s also about restoring the reputation of rights.

We should all be proud of what happened 800 years ago. So let’s celebrate today’s anniversary. Let’s put human rights right.

To those who say we can’t, I say of course we can – we’re the country that wrote Magna Carta; that has one of the oldest democracies and most respected legal systems the world over.

Human rights weren’t invented with Labour’s Human Rights Act – they’ve been part of the fabric of our country for decades.

If we are lucky, yesterday’s pompous celebration does not say as much about Britain as it does about Tory manifesto. Now, only if we are super-lucky and we work on it, we will manage to save the Human Rights Act.

(Find out more about why it’s worth fighting for the Act here).

(Cartoon: Steve Bell in The Guardian)