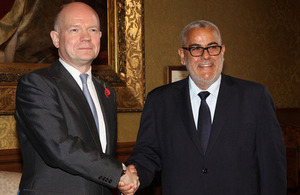 A few days ago the British Foreign Secretary, William Hague, met the Prime Minister of Morocco, Abdelilah Benkirane. In a short press note, the Foreign Office said that “Morocco stands as a strong example of peaceful reform and progress in North Africa, and the UK will continue to support the government’s reform process”.

Perhaps the Foreign Secretary forgot that since the mid-1970s Morocco occupies militarily a territory roughly the size of the UK: Western Sahara. A colony of Spain since the mid-19th century, the territory and its population were left on their own when Spain left shamefully in 1975-1976. Morocco immediately occupied the land upon the Spanish retreat. In an advisory opinion issued in October 1975, the International Court of Justice rejected the Moroccan sovereignty claims over Western Sahara. For fifteen long years, the Moroccan army and the Saharawi national liberation force (Polisario Front) fought a bloody war that scattered landmines across the territory and expelled tens of thousands of refugees to the neighbouring Algeria. The Polisario Front also fought against Mauritania until the latter’s withdrawal in 1979. After some years of military stagnation, in 1991, under the auspices of the United Nations Morocco and the Polisario agreed to a settlement plan that included a referendum where the local Saharawi population would have the chance to determine its own future. A UN mission (MINURSO) was set up to ensure the settlement was respected and fulfilled. However, to this day, Morocco has consistently refused the Saharawis the referendum they are entitled to by international law and the 1991 peace agreement. Morocco uses its military force to retain control over Western Sahara, while around 100.000 people survive in the refugee camps of Tindouf, in the Algerian desert. Those who remained in the occupied territories suffer continuous violations of their human rights, including torture, unresolved disappearances, restrictions to the freedom of association and discrimination in the access to work, education and healthcare. In the meantime, the natural resources of Western Sahara, particularly fisheries and phosphates, are plundered in front of the eyes of the local population, which doesn’t benefit from these industrial activities and doesn’t have a say on them.

Precisely the military occupation of Western Sahara is the reason why Morocco is the only country in the continent that doesn’t belong to the African Union, which has the Saharawi Arab Democratic Republic as one of its founding members. In principle, the official UK position has not changed: “The British Government regards the status of Western Sahara as undetermined. We support the UN-led efforts to achieve a lasting and mutually acceptable political solution that provides for the self-determination of the people of Western Sahara”. Unlike the French diplomacy, which has historically supported the Moroccan establishment in the attempt to secure control over Western Sahara, the UK doesn’t officially see the so-called Moroccan “plan of autonomy” as “the only realist proposal on the table”. The question then is: If the UK Government doesn’t recognise the sovereignty of Morocco over Western Sahara and truly believes that the issue must be settled in line with the right to self-determination and international law, what makes Morocco “a strong example of peaceful reform and progress in North Africa”?