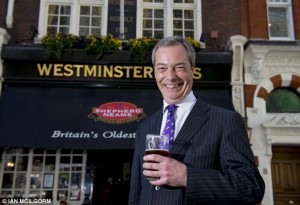 I attended yesterday an event organised by the European Institute of the LSE. The title was: “European Parliament Elections: What is at stake?” The speakers were Stuart Wheeler, UKIP treasurer, Maurice Fraser and Sara Hagemann, from LSE, and Mark Leonard, director of ECFR. The event was supposedly chaired by John Peet, Europe editor of The Economist. I say “supposedly” because he was there, but he didn’t do anything to prevent questions from the audience from becoming speeches from the audience. He didn’t really do a very good job, to tell the truth.

Anyway, one of the points that stirred up most comments was the issue about the amount of legislation that comes “from Brussels”. Mr. Wheeler said it was more than 70 or 80%. Others responded it was only 7 or 8%. My conclusion: Who knows? My question: Considering that 31% of Brits would vote for UKIP, does it mean that nearly 1 out of 3 don’t care about who decides in Brussels and, more importantly, what kind of decisions they make? (I didn’t have the chance to ask them; luckily, I have a blog)

When we talk about Brussels in Britain, it seems that we are talking about a different planet from where bureaucratic aliens impose their will on us. However, this only makes sense from a nationalistic viewpoint: We must decide here; regardless of the content or the process. From a democratic perspective, it must make a difference whether the balance of power in what we call “Brussels” leans towards the Commission or the Parliament, because while the former is not directly elected by the people, the latter is. The European Parliament is as democratically elected as Westminster. No more. No less. Isn’t it relevant whether the Parliament makes a difference or whether the Commission and the Council have their way?

OK, for better or for worse, the issue about the democratic deficit of the EU does not disturb the sleep of most of us. Yet, what about the policies? A number of analysts suggest that UKIP supporters are receptive to issues that have historically been raised by the left: fiscal justice, job creation, welfare state, public ownership of basic public services, etc., to which we can add the connection or lack thereof between political leaders and the people. This EU is controlled by the mainstream, is in love with businesses over anything else, soft on internal trade while hard when it comes to goods produced in the Global South, spineless on climate change, dubious about democracy, fearful of raising its voice about human rights violations within its borders, harsh on migrants… Let’s imagine an alternative for the moment (imagine your own). Should that be reality rather than your imagination, would Euroscepticism still be so high in this country?

Note I am talking about UKIP voters and not about the leaders of the party. We know that in contentious politics, leaders’ rational action and followers’ rational action do not match. The funniest moment yesterday was when the UKIP treasurer shared with the audience that her wife only started worrying about the EU when she found out that she had to comply with European regulations to keep her staple clean of horseshit. He made me feel sorry for her. From now on, in my list of concerns we have first the unemployment rate in Spain, then the lack of public healthcare in Greece, and in third place is this woman and her horses. Absolutely preposterous what they are doing to her. I’m sure UKIP potential voters would be as saddened by the story as me.

A dear friend of mine who works in the City has recently been “invited” to work on Saturdays, plus the 60 or so hours she regularly spends there from Monday to Friday. How come? Well, because when she joined the bank she was “invited” to withdraw her labour rights. This is only possible because the UK has opted-out from EU labour law. If you care about workers’ rights, sometimes the EU is the shelter and the nation (whatever you mean by that) is the problem. Unless nationalism is the only thing you are interested in, in which case who cares about workers’ rights, democracy or anything else, for that matter.

The Greek tragedy proves that Europe does not believe in economic and social rights as a matter of justice | Against the criminalisation of foreign fighters with the discourse of terrorism | When could I start considering the possibility of anti-homeless spikes? | What matters in the EU debate? Numbers, authorship or content? | Ruggie versus Ecuador: Will a human rights norm ever emerge regardless of Western support? |