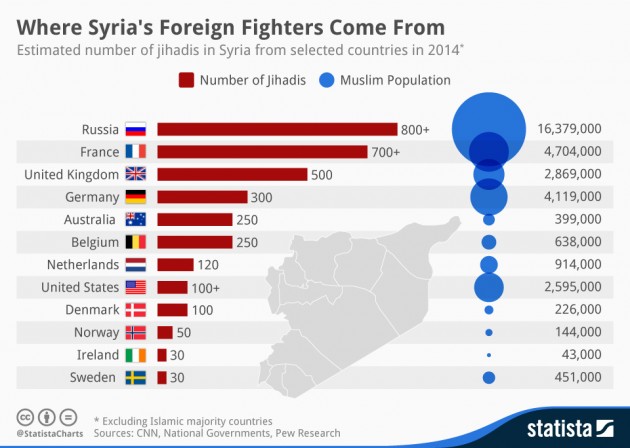 This is hardly a new phenomenon, but foreign fighters are getting more and more attention in relation to Syria and Iraq. The number of foreign fighters in both countries could exceed 20,000, and according to the Director of Europol, between 3,000 and 5,000 of them would come from EU countries.

In Resolution 2178, as well as previous ones since 2001, the Security Council urges states to adopt legislative and criminal measures to prevent terrorism and bring suspects to justice.

As noted by Scheinin, the formulation of these provisions relies on the intent (“purpose”) of the person to participate or contribute towards the commission of a terrorist offence.

The draft protocol, therefore, does not call for the criminalisation of travelling to conflict zones, and individual countries have not modified their criminal legislation to punish travelling per se. The subjective element of intent is required.

So far, these measures are targeting Islamic foreign fighters travelling to conflict areas with a religious motivation. However, there is no reason why these measures could not be potentially applied to other conflicts. For example, Spanish authorities recently detained eight nationals that had fought in Ukraine on the pro-Russian side. Apparently their actions may have infringed Spain’s neutrality, and therefore compromise the country’s “peace or independence”.

(Spain has recently modified its criminal legislation to persecute and punish “jihadist-style international terrorists”. Incidentally, this legislative reform coincides with a restriction of the principle of universal jurisdiction in the country. Prosecuting international terrorists is going to be easier, but doing so with genocidaires and war criminals is becoming nearly impossible in Spain.)

Thankfully, the UK, the US and tens of other countries did not think along those lines when George Orwell, Ernest Hemingway and 30,000 other international brigadiers travelled to Spain to fight Franco during the Spanish Civil War (1936-39).

The reader may argue that defending freedom and democracy against fascism is not exactly what pro-Russians and Islamists are doing in Eastern Ukraine and Syria/Iraq, respectively.

My point is different, though. The criminalisation of foreign fighters with the discourse of terrorism poses a fundamental challenge to the jus in bello, that is, to the law that regulates acceptable wartime conduct.

Terrorism is not a condition (“to be a terrorist”), but an action (“to commit a terrorist act”), and it is already prohibited in International Humanitarian Law (IHL): Articles 33 of the 1949 4th Geneva Convention, 51(2) of the 1977 Additional Protocol 1, and 4(2)(d) and 13(2) of the Additional Protocol II, of the same year. The International Committee of the Red Cross has authoritatively established that:

“The term ‘terrorist act’ should be used, in the context of armed conflict, only in relation to the few acts specifically designated as such under the treaties of IHL. It should not be used to describe acts that are lawful or not prohibited by IHL. While there is clearly an overlap in terms of the prohibition of attacks against civilians and civilian objects under both IHL and domestic law, it is believed that, overall, there are more disadvantages than advantages to additionally designating such acts as ‘terrorist’ when committed in situations of armed conflict (whether under the relevant international legal framework or under domestic law). Thus, with the exception of the few specific acts of terrorism that may take place in armed conflict, it is submitted that the term ‘act of terrorism’ should be reserved for acts of violence committed outside of armed conflict.”

Being a human action and not a human condition, terrorism (the act of terrorism) is a matter of jus in bello, not jus ad bellum (acceptable justification to engage in war).

In other words, the determination of whether an act should be considered terrorist does not depend on the legitimacy of the use of force, but rather on whether such an act meets the objective and subjective elements of the crime, as defined in IHL.

Again, this does not question the legitimacy of the use of force by Brits against the Nazi Germany (for which Europeans will never be grateful enough). It is not a sign of agnosticism regarding Ukrainian national integrity either. And it does not ignore that ISIS violates the human rights of the Iraqi population under its control in all imaginable ways.

The point I try to make here is that by using the discourse of terrorism in relation to foreign fighters, and by extending criminal jurisdiction over the foreign territories where these conflicts take place, we are breaching the fundamental distinction between the acceptable behaviour in warfare and the acceptable justification to use military force.

Countries must indeed hold accountable those who have allegedly committed war crimes. But the criminalisation of travelling, receiving training or joining forces in countries at war is not the way to do it, as much as we may loathe ISIS, prefer the Free Syrian Army to Al-Nusra, and fear Russia.