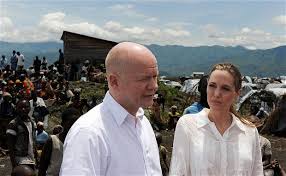 William Hague and Angelina Jolie are hosting a global summit in London to put an end to sexual violence in conflict (follow #TimeToAct). In June 2013, Madrid hosted the 5th world conference on (against) death penalty. It was organised by an abolitionist group (ECPM), and sponsored by the Governments of Spain, France, Switzerland and Norway.

Western European countries promote international human rights norms. The summits of London and Madrid are just two examples of what and how they do it. Now, the questions are: Why do they do it? And, related to this, what kind of norms do they promote?

According to Finnemore and Sikkink’s famous model of international norm diffusion, states play a major role in this process when they choose to embrace certain norms, understood as “standards for the appropriate behavior of states”. Finnemore and Sikkink are of the opinion that states promote human rights norms “for reasons that relate to their identities as members of the international society”. In other words, states promote norms because they consider them legitimate.

I hold a different opinion.

I think that so far International Human Rights Law (IHRL) has evolved as a result of a tension between two forces: On the one hand, a European understanding of international society, based on order, the centrality of the state and a minimalist conception of human rights; on the other hand, a civil society and UN-promoted, mostly Western, particularly European and slightly broader conception of human rights.

Human rights diplomatic talking is full of references to justice, equality, freedom or solidarity, but if the promotion of human rights law by states really were a cosmopolitan project, we would expect states to behave in line with human rights as a matter of principles. However, a reality-check proves otherwise. In general, countries inside and outside Europe were much quicker in proclaiming rights than in providing the necessary tools to ensure their implementation and enforcement. If states promoted human rights as a matter of justice, one would expect to see them using all resources available to enhance the protection of human rights beyond borders. It is rather telling in this regard that states have hardly ever used the inter-State complaints at their disposal in the international human rights regime (never at the Human Rights Committee and in the inter-American system, 16 times in the European system and only once in the African system).

Western European states promote IHRL as a matter of order rather than justice, which is not tantamount to saying that IHRL is just the reflection of the West’s power and will, as realists would put it. The existence of independent human rights monitoring bodies, as late and weak as they can be, contradicts the realist expectation. Realism would find it very hard to explain the high degree of state compliance with the judgements of the European Court of Human Rights.

IHRL cannot represent the will of the European West because IHRL has its own life. It does not simply reflect the will of Western European governments. Even though the international institutionalisation of human rights owes much to the European input, other actors have also had an influence: Apart from non-European countries with different programmes, there are NGOs, think-tanks, journalists, UN bodies and like-minded government officials and diplomats. These actors are motivated by forces that have more to do with global justice than with the maintenance of international order. Because of the number of independent advocacy actors within the international human rights regime, Western European states cannot be certain about the future meaning of the norm they are helping to bring to life. At times, states and advocates’ paths may merge for strategic or tactical reasons and a new human rights norm may emerge out of that momentum, but the motivations beneath each actors’ decision are different. The fate of the new-born norm will depend upon the power distribution between states and the advocates. Once the norm enters the realm of IHRL, states will not keep all the power over its meaning any more.

So , what do we expect to see if states promote international human rights norms as a matter of order rather than justice? These are my hypotheses:

The third point of this list may explain why the UK Government focuses on rape in armed conflict and Spain focuses on the abolition of the death penalty. Spain has not seen an execution since September 1975, and this punishment was totally erased from the legislation in 1995. In fact, only one country in the whole of Europe still applies the death penalty: Belarus. A global moratorium or even a hypothetical norm of jus cogens (mandatory law) against the death penalty would not make any difference in the Spanish criminal law. Regarding the case of the UK, a coherent policy would demand a clear message of support to the International Criminal Court, but other than that overall the advocacy against rape in conflict situations is perceived as a low-cost issue of foreign affairs. In fact, when William Hague was interviewed by Cathy Newman in Channel 4 about the impact of his campaign in the UK considering the Education Secretary’s refusal to improve sex education in schools, the Foreign Secretary responded: “I’m backing young people all over the world talking about these issues. But I’m not going to decide the education secretary’s policies for him. I will leave that to the education secretary”.

The way I see it, Mr. Hague’s words confirm the order-versus-justice approach, which suggests that Western European states will promote those rules that are in line with their understanding of global order. For the very same reason, they will refuse to endorse a norm that they consider to be at odds with an ordered international society.

At a time when rising powers are emerging strongly from the Global South, identifying the factors that lie beneath the legal recognition of human rights is key to ensure that these ideal goals of humanity inspire policy decisions in the coming years. It remains unclear whether we have any reason to be hopeful about the prospects for the human rights regime, but I agree with Mandeep Tiwana: “There is a pressing need for southern democracies to come forward and free the human rights narrative from the strategic goals of western governments”.